Skip to content
Home Avian Articles Why do Parrots Bite and What can you do?

Why do parrots bite? In this article, our resident blogger Dorothy Schwarz shares her opinion and experience about parrot biting and how we can avoid it.

My first two parrots were (and still are) non-biting, being a pair of Red-tailed African Greys hand-reared by Barrett Watson in Suffolk. They came fully weaned, flighted, knowing step-up, and above all, the quality that they retain to this day, a basic trust in people. Bird keeping was a pushover, so I decided and build a large aviary. The current flock varies between 20 birds; many rescues or re-homes – an eclectic mix of 2 Greys, 1 Amazons, I macaw and 22 parakeets. The environment provided is as natural as possible. We even have four gum trees growing amongst bamboo clumps.

Mirt, other Timnehs and Greys

Sometimes, second-hand birds are well-adjusted enough to become contented pet or aviary subjects, but sadly, most are not. Mirt, a wild-caught, Timneh African Grey, a fully mature bird – age unknown, arrived plucked, thin and flightless; she’d been kept in a cardboard box for 8 months. She crawled away across the aviary roof or bit if you got too close. Once Mirt lived free in the aviary, she regained flight muscles within two weeks. I used sunflower seeds for her training rewards. Mirt learned from watching Artha and Casper fly to me for a sliver of nut or sunflower seed. It took two years before she trusted me enough to perch on my hand. That time spent with her was justified when, for the first time, she perched upon a friend’s outstretched palm and took a nut. All biting had ceased months before this. I believe it is easier to retrain wild-caught birds not to bite.

Keeping mixed species, even in a large aviary, has drawbacks, one being that birds will attack weaker ones. Mirt fatally wounded an Alexandrine parakeet. For two years, Mirt had been allowed out of the aviary for at liberty flight times. After the attack, I made a fatal error and let her outside. Into a gale-force wind which blew her away. Although I searched for six months, I never retrieved her.

Her friend Sid, another elderly, wild-caught Timneh, appeared to miss her. He called loudly for weeks after her loss. Sid had been kept alone for 12 years. He was lame from an untreated broken leg. At any brusque approach, he lunged and bit. The solution was elegant and simple. I held out a peanut on the other side of a stick. Within two weeks, Sid was stepping up and could be carried from one perch to another. He never regained more than minimal flight skills. It seems that some owners keep wild-caught Timnehs closely caged because they cannot be handled. Big Boy was another such. His owner of 25 years had a stroke. The temporary carer showed me the tiny, bare cage and her bitten hands and arms. “He won’t let me stroke him,” she complained.

Well, I never stroked him either in the year that he lived with us, but he, too, learned to step up onto a stick and make short flights. He flew to me one morning and died in my arms. The necropsy showed an enlarged liver due to years of a poor diet.

Why do parrots bite?

A frequent biting situation occurs because we don’t watch the birds’ body language. Most birds try to warn us. Their posture stiffens, their feathers held tight to their necks. Some bite because they simply cannot get away.

Owners mistakes. We often teach a bird to bite by not watching the signals it gives. I have seen a bird lean away from the handler, who leans further towards the bird. The bird leans further away. The handler leans closer. The bird shuffles to the end of the perch. The handler pokes out a hand at the bird and says, ‘step up.’ And then is aggrieved when the parrot bites. And for confirmed biters, their signals have been ignored so often that they have given up trying. They will just lunge at you. With such a bird, immense amounts of patience are required to re-establish the trust it has lost with its caregivers.

I changed Grey’s name from Bingo to ‘Ouff’ because that’s what he constantly said. He’d been rescued from seven years stuck in a small cage. The new carer bought a better-sized cage but was unable to handle the parrot’s lunges and bites. It wasn’t her fault or Ouff’s. I watched them together. Ouff would walk along his perch away from her (he couldn’t fly) and she’d come after him again and again until eventually he bit. The situation worsened. She asked us to take him. I left Ouff un-caged in the conservatory and gave him a choice – he could interact with me or not as he wished. After 8 months, Ouff stopped biting and stepped up into a stick. I never touched him. He relearned to fly and also learned some tricks like wave and turn around from watching the other pet parrots.

My friend Ian rescues abused birds, many of them pluckers, biters, screamers. One, a Lesser Sulphur Crested cock Eric, had been left in a windowless, rat-infested shed. Ian had had him over a year; he was a confirmed biter. Feeling confident after several successes I’ve had with the biting Timnehs and Greys, I offered to foster Eric for a couple of months. I was hopeful I’d stop his biting?

At the end of the aviary is a 3-metre flight, where I put new birds or any bird that cannot fly yet. This flight is filled with branches, swings and lots of chewable wood. Eric’s previous cage at Ian’s had been without much enrichment. He thoroughly explored and used everything put there for him. The space was about ten times larger than his previous cage. Eric would call out in that butter-wouldn’t-melt-in-his-mouth tone, “Hello, Eric, good boy, Eric.”

My previous experience was that birds don’t bite if you don’t encroach on their space. Not so Eric. He flew at my face on the 2nd day. The flight has no swing feeders so whatever happened I had to enter at least once daily. Ian handled Eric by throwing a towel over him. I had to do the same to clean and refresh food and water bowls. We’re not supposed to attribute human emotions to birds but in Eric’s case he acted angry! Or maybe he was defending a territory? We cannot know a bird’s mind but can feel his bites! Deciding not to use a towel, I’d enter the flight wearing protective gear, sunglasses, boots, hooded coat, hat and gloves. The family fell about laughing. Did it work? Yes and no. Eric never flew at me again but on occasion latched onto my Wellington and tried to bite through. He loved scrambled eggs which I began to feed him from a spoon; he quickly learned to step up onto a stick and eat his eggs. This small step forward wasn’t yet enough. One morning, he was eating nicely from the spoon. Giving no perceptible warning sign, he scooted down the stick, grabbed my coat sleeve and bit through to my arm.

Wendy Huntbatch runs a cockatoo sanctuary in Canada; she probably knows as much about problem cockatoos as anyone alive. Her solution: put Eric in a large aviary and let him alone; give him up to one year to forget his anger and relearn trust. This solution might have worked but not in my aviary because of Perdy, cockatoo’s reaction. Now almost 6 years old, she decided that she wanted Eric for her friend (or possibly mate?) Who knows which? Her hormones kicked in. She’d perch outside his flight, peering at him, fluffing up. She began flying at me when I approached. She finally got my finger and hung on. The first time, she’d bitten in 5 years. I could not cope with two biting cockatoos. Eric went back to Ian. I’d failed. Perdy, once Eric had gone, regained her usual sweet tempered behaviour.

What does not work with birds is any display of anger. Nor does punishment. Their minds do not work that way. Some old training manuals advocated full frontal staring at the bird face-to-face giving it ‘the evil eye.’ That has to be poor advice. Birds are prey animals with eyes set at the side; whereas predators like hawks, humans or wolves have their eyes at the front. Staring full on to a bird tells her that you are a predator not a pal. If you approach a nervous bird slightly sideways and do not stare at her and give her space around where she is standing you are far less likely to provoke nervous biting behavior. And be sensitive to their moods. A nervous bird will have periods when she is more receptive and other times when she wants to be left alone.

If a bird seems not to like your presence and lunges at you. You can always try food management to persuade the bird that you’re someone who provides special treats. If the favourite food is removed from the food bowl and you’re the one who drops by and puts a special food treat into the bowl, in time and often a short time, as with my Timneh Sid, the bird’s starts to regard you in a positive light.

Birds don’t generally bite in their wild state. Usually in a fight one backs down. Unless a bird is unusually aggressive, most prefer to fly away rather than bite. We’ve allowed this bad habit to develop in the captive environment. Is the bird biting through fear, (the most common) anger, jealousy or protectiveness? If you can find the cause, you can alter the environment – either to prevent the biting situation arising or to allow the bird space to avoid you. 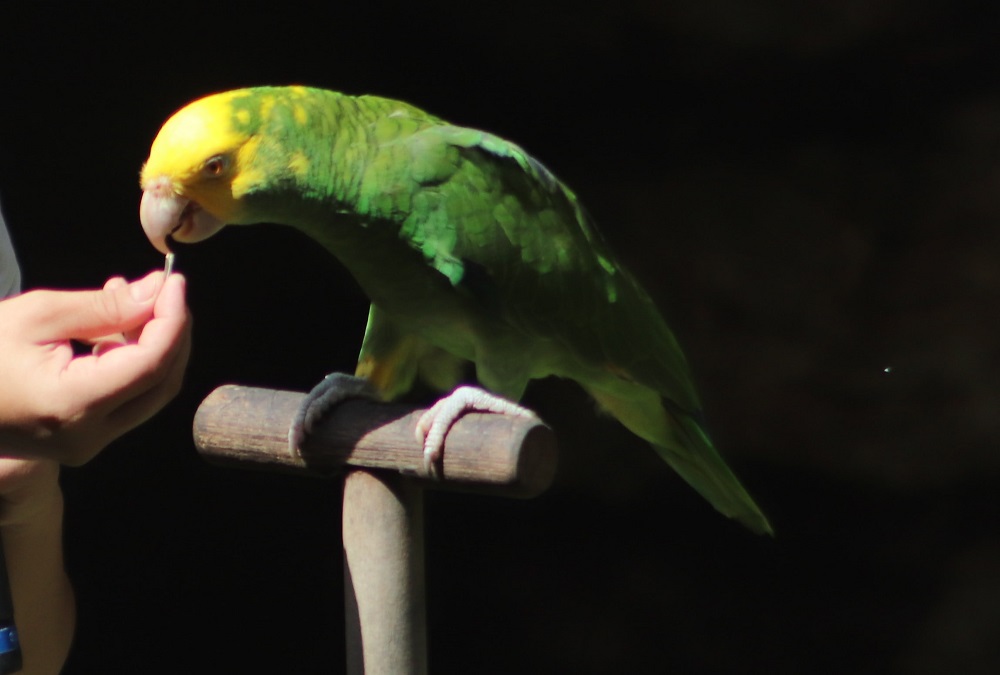 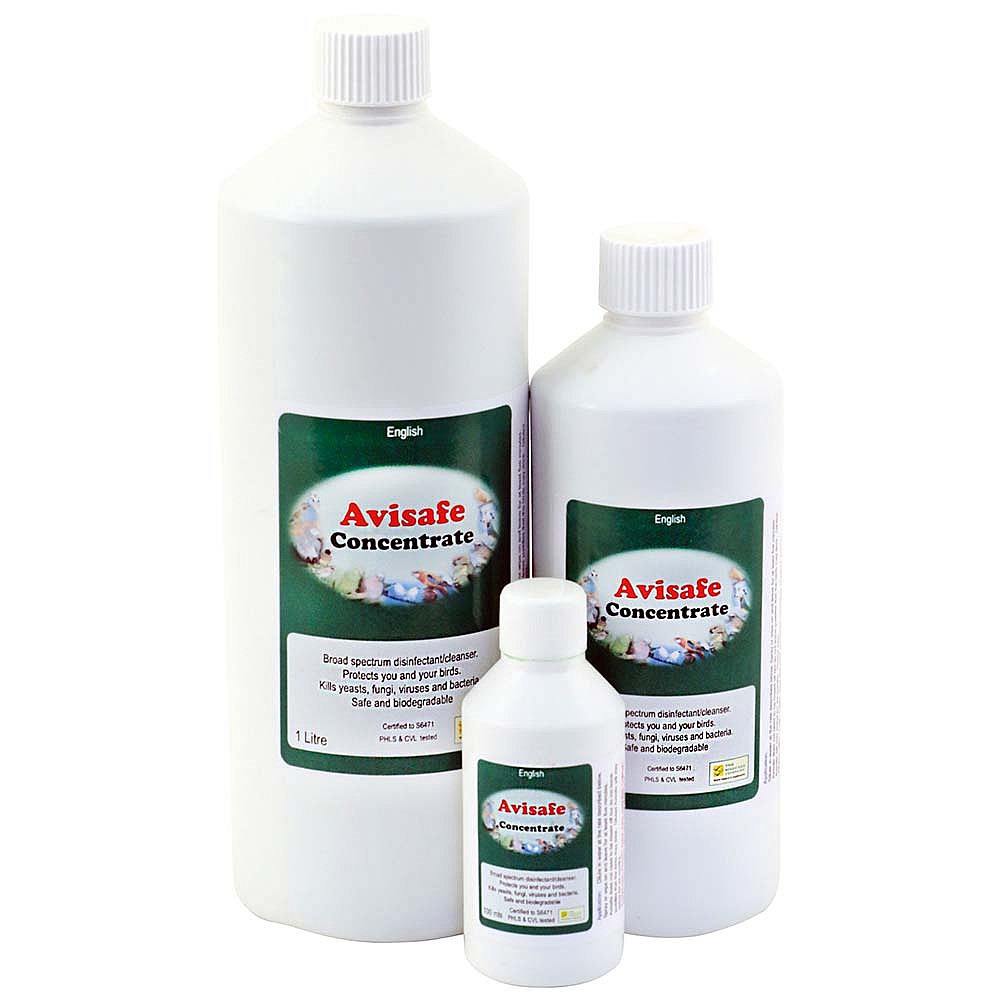