A recent study shows that Parrots have Social Intelligence too.

An experiment carried by Dr Brucks shows that Parrot Have Social Intelligence in addition to their cleverness.

During this research, a series of experiments showed that African Grey Parrots have Social Intelligence skills too. Could our companion parrots be selfless? This research proved that to be true, as an African Grey Parrot shares his priceless metal washers for the benefit of its neighbouring parrot.

In this research, two African Grey Parrots were put next to each other in a clear walled laboratory compartment with a human standing in front of them and holding delicious walnuts. The one African Grey Parrot had a pile of valuable washers and the other parrot had no washers but could reach the human with the walnut treats.

A human waited nearby with her hand outreached. If the washers were given to the human, she would hand back delicious walnuts, but the parrots with the washers could not reach the human, only its neighbouring parrot, whos compartment had a small opening.

The parrot started picking up washers in its beak and passing them to its neighbour.  At least one of them will get some walnuts today.

“They were quite intrinsically motivated to help another,” said Désirée Brucks, a cognitive biologist at the Max Planck Institute for Ornithology in Germany.

Dr Désirée Brucks, a cognitive biologist at the Max Planck Institute for Ornithology in Germany has been training parrots to exchange washers for tasty treats. In this experiment only one bird would have the token, the other could reach her hand. Right from the start, the parrots with tokens gave them away, even though they got nothing in return. “They’re the first non-mammals observed helping each other in this way, suggesting other animals have evolved the ability to act selflessly,” as stated by the journal of Current Biology.

Irene Pepperberg thought Alex (African Grey) to use over a hundred words and identify shapes and colours. But the researched by Dr Brucks shows that there are other ways to be clever too. She wanted to see how African greys can relate to one another’s needs.

Dr Brucks and her co-author Auguste von Bayern tried their experiment on eight African grey parrots. They found that pairs with closer relationships before the experiment who spent more time preening or feeding each other were more likely to help one another. Humans, too, prefer to help their friends, Dr Brucks pointed out. But the parrots also helped others they weren’t as close with.”

Then, the experiment was tested on a different parrot species. The blue-headed macaw acted selfishly and did not share the washers. The researchers think different social systems in the wild may help explain the different results. African greys live in huge, constantly shifting flocks. It might be important for the birds to immediately build good relationships, so that if they need help in the future — such as extra food, or help chasing off a predator — they’ll get it. On the other hand, blue-headed macaws live in smaller, unchanging groups so building a relationship might not be as important to this parrot species.

This kind of helpful behaviour is known by scientists as being prosocial. Finding and testing new hypotheses will help us understand why some animals have evolved to lend a hand. “In humans, it’s known that we help others because we empathize with them,” Dr Brucks says. But researchers can’t tell whether African grey parrots feel the same way or help others simply because they expect favours in return. They also don’t know how common it is across the animal kingdom for other species and animals to help each other out. Dolphins, rats and vampire bats have observed giving help. But only a few apes have acted like the African grey parrots, aiding others and acting selflessly.

What IS known is that we aren’t the only species that help each other. After millions of years of evolving and changing, both us and African grey parrots have developed the habit of looking out for a neighbour a time or two.

To keep your parrot mentally challenged and stimulated visit www.ParrotEssentials.co.uk/Puzzle-Parrot-Toy 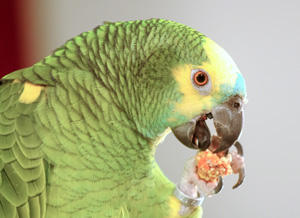 Will Parrots Work For Food explained by Dr Irene Pepperberg. Dr Pepperberg, an adjunct associate professor at the Dept. of Psychology, Brandeis University, Waltham, MA, is cracking the code when…